Cassidy Coverdell was sponsored by Treasure State Seed in Fairfield. Cassidy attends Montana State University in Bozeman and expects to graduate in May of 2017. She is an avid volunteer in her community and is passionate about her future as a teacher and hopes to eventually make her way into school administration. Cassidy stated, “As a teacher I will see the changes of my students, witness their goals coming to fruition, and see firsthand their work in action. I want to inspire my students in all aspects of their lives and motivate them to be the best that they can be.” The Montana Seed Trade Association is pleased to have awarded $1000 toward her education for the 2015-2016 school year. 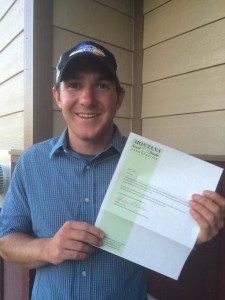 Joel DeVries was sponsored by ClearView Seed. Joel is the Son of Mike and Heather DeVries and is no stranger to the MSTA. He grew up attending meetings with his parents and has worked both full and part time at their facility in Denton, MT. Joel is a Junior at Montana State University and planning to graduate in May of 2017 in Crop Science. It is his intention to move back to Denton and join his parents in the family business. Joel is a volunteer fireman and works in the leadership team and the worship team for Crosslife, a college ministry group in Bozeman. He spent his summer working for Northern Seed Inc. at their facility in Bozeman. Joel was awarded $1000 for the 2015-16 term.